How do you like your oysters?
Raw? Fried? Steamed? Hot pot is good too, right?
Today we will introduce a local gourmet appropriate for an oyster growing port town.

Okonomiyaki with oysters, or kakioko (kaki = ‘oyster’) in Japanese. Busy fishermen have eaten Kakioko as a light meal since the late 1960s before the concepts of local gourmet or B-grade gourmet had even been born.

At that time, the dish wasn’t called kakioko, but as activities to enliven the region with this Hinase soul food began, the dish was named kakioko.
After participating in the 2011 B-grade local gourmet festival (B-1 Grand Prix) competition in Himeji the dish was introduced to the whole of Japan.
I tried some of this original local gourmet that is enlivening the Okayama area. 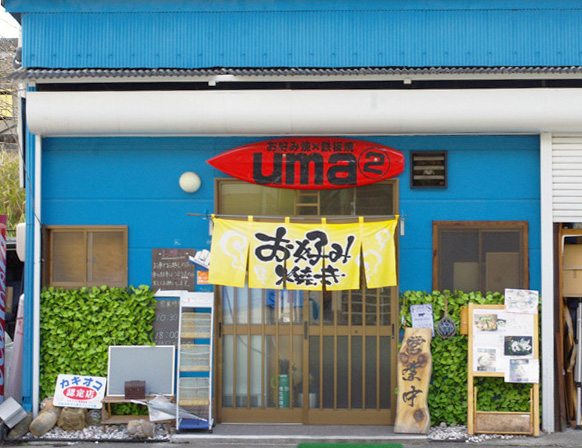 First off I visited the restaurant Uma x Uma.
Here the kakioko has an okonmiyaki unique to Hinase, Hinase-yaki as its base. 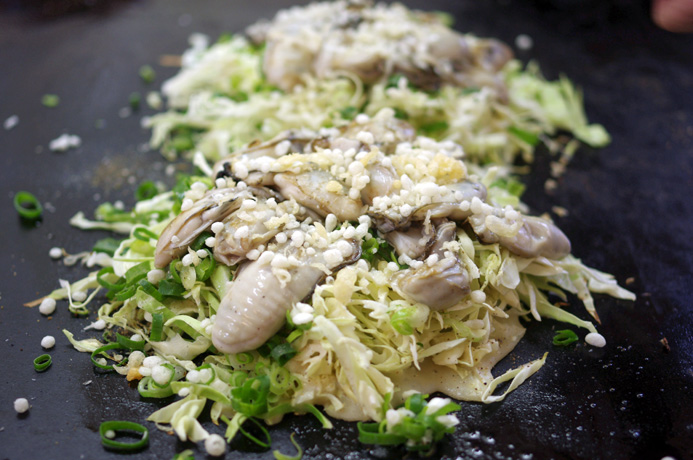 Hinase-yaki is made by quickly mixing together a large heap of cabbage with batter and spreading it on a hot plate. Next, peeled oysters that have been fried on the hot plate, tenkasu (crunchy deep-fried dough, a byproduct of tempura), green spring onions, and egg among other ingredients are thrown on top of the base and fried until the dish is ready. Done. This is the finished product, kakioko (JPY950). It may look the same as normal okonomiyaki, but it is filled with oysters that were fried on the plate just a moment ago.
No matter which part you eat, there’s bound to be some oyster in there.
The cabbage is crunchy, and as the juices from both the cabbage and oysters are coupled, it is really juicy. The sauce is a bit spicy – it’s a dish that makes you want to drink beer! This is Maki, the owner of the shop. She’s so pretty, isn’t she?
I’d like to talk with her, but as I have to get to the next restaurant, I leave the store behind somewhat reluctantly. I’ll come again tho! 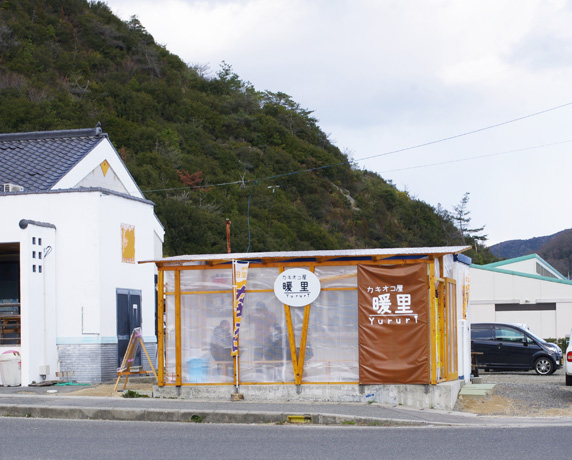 Well then, the second restaurant is called Yururi.
This shop, located on the other side on Hinase fishing port and Gomi no Ichi market, specializes in take-outs that you can eat when you don’t have too much time, or even during working hours… After hearing the words ‘take-out’, please don’t get the wrong idea! The store is a representative of the authentic style with thought put in the flavoring of the batter and even how the cabbage is cut. This time we ordered the Kaki zoryou (‘More oyster’) (JPY1000).
It includes a whopping 10 oysters!
At this shop, the ingredients are mixed well together with the batter and then fried. After that, raw oysters are added on top. No matter which part of the dish you eat, it’s oysters, oysters, and more oysters.
The batter and other ingredients support the oysters, the main act, and the aroma of the sea coupled with the sweet sauce slowly fills your mouth. Kakioko sauce, as its name suggests, was developed just for kakioko, in cooperation with a local soy sauce manufacturer, Takatori Shoyu, and made in Hinase’. As it’s apparently delicious on deep fried oysters and pork cutlets, as well as okonomiyaki, it makes a good souvenir (JPY600 + tax).

Oh… I’m so full. Thank you for the meal.
Then I received some new information! Apparently, there’s a specialist store in Hinase that makes delicious boiled gyoza. This is the rumored gyoza and it really is delicious!
Apparently, the ingredients including Okayama pork and yellow chives are chosen carefully in the local Okayama area.
Although I’d already had two kakioko (with around 20 oysters), the gyoza just slid down… Just when I was admiring the depth of Hinase gourmet, a person in a suit appeared before my eyes…
This is Mr. Kawahira, the representative for the Hinase Kakioko Town Planning Committee. Apparently he is the person who came up with the name, kakioko.
But why am I eating boiled gyoza right now… While I’m eating he even says to the owner that we should sell these gyoza to Tokyo. This must be the kind of vitality that takes a nameless soul food and turns it into a trigger for revitalizing a town!
It’s clear that the photo-writers & Kokohore Japan, who are a part of the regional vitalization groups in Setouchi city, a neighbor of Hinase, had some lively conversations!

Kakioko was not just filled with the good flavor of fresh plump oysters, but also with the flavor of Hinase, the people of whom are filled with a passionate love for their hometown and an eagerness to revitalize their region.